Arthur Peacocke recognized a gap in popular imagination between the realms of science and religion. He taught biochemistry at Birmingham and Oxford for over 20 years before seeking ordination and moving full time to questions of theology and science. He subsequently taught theology at Cambridge and later Oxford as the first director of the Ian Ramsey Centre for Science and Religion. In 1986, in conversation with several other ordained scientists – Eric Jenkins, John Chalmers, and John Kerr – he came to believe in the importance of a society of such individuals to share the vocation of speaking between worlds, deepen spiritual commitment within this type of work, and reach out to the public on issues of faith and science.

In Peacocke’s words: “Although only a small proportion of the population as a whole have any accurate scientific knowledge, it is science and technology which are creating new attitudes. To people so influenced the language of the Church appears to be not only obscure but obscurantist and, even, dishonest. The clergy are, through no fault of their own, ill-equipped to speak effectively to a scientifically conditioned people, for the proportion of them who have had any scientific education is practically negligible. Thus, the ordained leadership of all the churches contains practically none who understand, from the inside, the chief formative influence in the mind of modern man.”

The four priest-scientists set out to create of a community of like minded individuals who could call on one another in common mission and support one another in common prayer. They believed that the situation called for intellectual rigor, but always in the context of worship and silence. They envisioned a group that could visibly confront the intellectual issues of the day, while quietly committed to spiritual practices and personal faith. 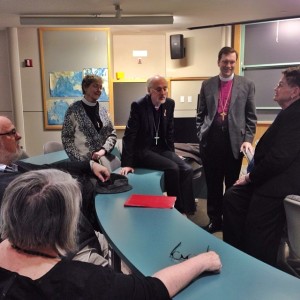 Building on academic forums around science and religion, they called the first meeting of the Society of Ordained Scientists in 1987, a retreat at Foxhill in Cheshire, England. Twenty-seven founding members made a commitment to the society. The society was officially recognized by the Church of England with Peacocke as the Warden and John Habgood, Archbishop of York (and Ph.D. in physiology) as the Episcopal Visitor. Within a year the society had doubled in size and annual retreats began at Launde Abbey, Leicestershire (and eventually other locations).

The society has slowly been spreading in the Church of England and now accepts members from multiple denominations around the world. Requirements of ordination and proficiency limits memberships, but the society has settled at around 100 members. In 1996, just two years after the first woman was ordained priest in the Church of England, the society selected Maureen Palmer as its third warden, wanting to embrace the best aspects of reform within the context of tradition. We continue to work as individuals and as a community to bridge past and future, never losing sight of God’s call in the present.

The Society remains centered in England around the annual retreat, but members come from as far away as the Kiev and San Francisco. In 2010, a North American province formed to accommodate growing interest in the United States and Canada, where a third of the members live. They hold a biennial retreat for those who cannot travel to England.

The society is proud of the academic careers of many members, including Arthur Peacocke, John Polkinghorne, and Robert Russell, all prominent in the field of science and religion. It also remains devoted to the daily work of making sense of theology and science in the daily context of parish ministry, where most of our members work. Integrating science and theology, reason and faith is not just a work for scholars; it is something all of us have to do every day, as God calls us each in our own time and place. We would be delighted to hear from you what issues move you in science and religion, what answers you have found, and what questions you may still have. 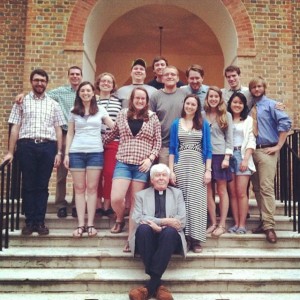